The enhanced tactile sensitivity of blind and visually impaired women might make them especially suitable for breast examination, according to a visionary German gynaecologist. If it’s true that mammography is an effective breast cancer screening method until now, it’s costly and often not available for free, especially in low income level countries with a low level of health infrastructure. That’s why Frank Hoffmann first thought in 2006 of training blind and visually impaired people to work in breast cancer prevention, taking advantage of their highly developed aesthetic capabilities. The German resident gynecologist from Mülheim an der Ruhr launched in 2010 a social enterprise named “Discovering hands” with the added goal of creating a new field of employment for blind and visually impaired people, by turning their disability into a special skill. 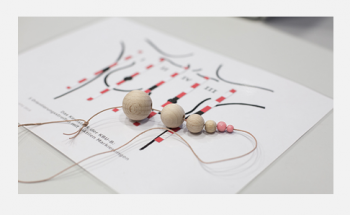 (Photo from the website http://www.discovering-hands.de) His “Medical Tactile Examiners” (MTEs) are trained for nine months to carry out physical breast examinations in medical practices and to use a standard diagnostic method for examining the female breast based on custom-developed Braille orientation strips for the detection. The MTEs never diagnose directly: they assist the doctors by lending them their “discovering hands”. Usually, a breast examination performed by a gynecologist takes a few minutes. A tactile examiner spends at least 30 minutes for each session, not only by looking at the breast but also by educating patients about how to deal with the risk of breast cancer. Preliminary results of a still-unpublished small trial carried on at the University of Erlangen (under the supervision of Professor Matthias Beckmann) indicate that MTEs detect significantly more chest tissue changes than doctors, also because they notice them when they are smaller. Currently, more than 35 gynecological practices and hospitals across germany employ MTEs trained by the programme; more than 12.000 examinations have been carried out to date. According to “Discovering hands”, the model has expanded in Austria, runs pilot projects in both India and Colombia while more than 25 organizations from different countries have shown interest in it. Cancerworld